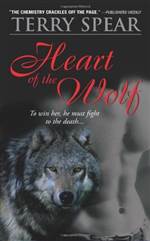 Heart of the Wolf

Their forbidden love may get them both killed. Bella is a red werewolf, sole survivor of the fire that killed her entire pack. Devlyn is a beta male werewolf in a pack of grays. Forced to flee her adopted gray pack when the alpha male becomes a vicious threat, she struggles to live as a lone wolf, until Devlyn, the gray male who rescued her as a pup, comes to bring her home.

When a local red werewolf goes on a killing spree, Bella and Devlyn must flee the murderer, the police and their vengeful pack leader. With the full moon rising, and her heat upon her, Bella can't resist the pull to her destined mate, even if means Devlyn will have to face the wicked alpha male in a fight to the death...