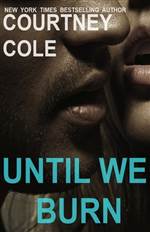 Until We Burn (Beautifully Broken #2.5)

As a 24-year old actor with the world on a string, not many women tell Dominic no. In a life where no doesn’t exist, he stretches the boundaries between what is right, what is wrong and what is downright depraved. Dark and damaged, Dom wants no commitments.

He wants no attachments.

He only wants to disappear into the taboo, into a place where he feels something.

But when the aching need to disappear into the darkness is the only thing he has left, Dominic flounders. In a world that is hollow and sexual, without a guiding light or a reason to breathe, Dominic is lost and broken. He knows he’ll never be fixed. So he makes a decision.

If he’s going to hell, he might as well make it worth it.