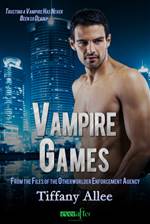 She’s seen the past…

OWEA Agent Beatrice Davis is haunted by the death visions that help her solve crimes. When Detective Claude Desmairis, her vampire ex-lover, asks for her assistance on a case, she’d rather help him than take the mandated leave to stave off her burn-out.

Pressed to solve a series of crimes before the perpetrator blows the vampire world apart, Claude turns to a woman he thought he’d been able to leave behind. But he was wrong, and his feelings for her will only bring trouble in an investigation this dangerous.

As their passions reignite, they see a possible future together. Until her visions show her the face of the murderer—a man Claude can never betray.