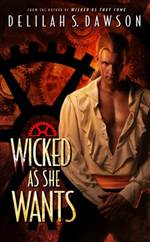 Wicked as She Wants

When Blud princess Ahnastasia wakes up, drained and starving in a suitcase, she’s not sure which calls to her more: the sound of music or the scent of blood. The source of both sensations is a handsome and mysterious man named Casper Sterling. Once the most celebrated musician in London, Sangland, he’s fallen on hard times. Now, much to Ahna’s frustration, the debauched and reckless human is her only ticket back home to the snow-rimmed and magical land of Freesia.

Together with Casper’s prickly charge, a scrappy orphan named Keen, they seek passage to Ahna’s homeland, where a power-hungry sorceress named Ravenna holds the royal family in thrall. Traveling from the back alleys of London to the sparkling minarets of Muscovy, Ahna discovers that Freesia holds new perils and dangerous foes. Back in her country, she is forced to choose between the heart she never knew she had and the land that she was born to rule. But with Casper’s help, Ahna may find a way to have it all….