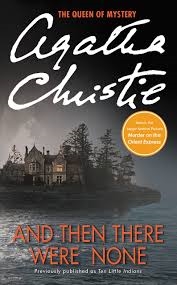 And Then There Were None

And Then There Were None is a mystery novel by English writer Agatha Christie, widely considered her masterpiece and described by her as the most difficult of her books to write. It was first published in the United Kingdom by the Collins Crime Club on 6 November 1939, as Ten Little Niggers, after the British blackface song, which serves as a major plot point. The US edition was not released until December 1939; its American reprints and adaptations were all retitled And Then There Were None, after the last five words of the song. It is Christie's best-selling novel; with more than 100 million copies sold, it is also the world's best-selling mystery and one of the best-selling books of all time. Publications International lists the novel as the seventh best-selling title.