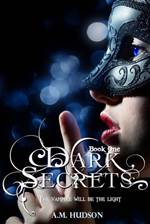 How can you be attracted to a guy who just said he wants to kill you?

Ara-Rose asks herself the same question. She’s been torn away from her old life, thrown into a new one in a new country, and in the midst of death, heartache and depression, she finds herself in love with a vampire—one who kills people with his teeth!

But the vampire is forbidden to fall for this human, and at the point Ara-Rose decides she can’t live without him, he pulls away and leaves her falling back to the darkness he woke her from. She will be caught up in a century-old feud among brothers, and the fight for love becomes a fight for her life.

The only question now is whether her beloved vampire will find her in time, or leave her to face a destiny he triggered with their first kiss.


Since their release in 2011, Books 1 & 2 from the Dark Secrets series have come together, presented as one great book for one low price.