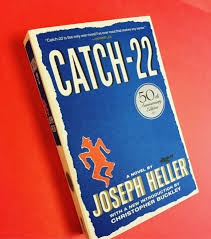 Catch-22 is a satirical novel by American author Joseph Heller. He began writing it in 1953; the novel was first published in 1961. Often cited as one of the most significant novels of the twentieth century, it uses a distinctive non-chronological third-person omniscient narration, describing events from the points of view of different characters. The separate storylines are out of sequence so the timeline develops along with the plot.The novel is set during World War II, from 1942 to 1944. It mainly follows the life of Captain John Yossarian, a U.S. Army Air Forces B-25 bombardier. Most of the events in the book occur while the fictional 256th Squadron is based on the island of Pianosa, in the Mediterranean Sea, west of Italy. The novel looks into the experiences of Yossarian and the other airmen in the camp, who attempt to maintain their sanity while fulfilling their service requirements so that they may return home.The development of the novel can be split into segments. The first (chapters 1–11) broadly follows the story fragmented between characters, but in a single chronological time in 1944. The second (chapters 12–20) flashes back to focus primarily on the "Great Big Siege of Bologna" before once again jumping to the chronological 'present' of 1944 in the third part (chapter 21–25). The fourth (chapters 26–28) flashes back to the origins and growth of Milo's syndicate, with the fifth part (chapter 28–32) returning again to the narrative present but keeping to the same tone of the previous four. The sixth and final part (chapter 32 on) remains in the story's present, but takes a much darker turn and spends the remaining chapters focusing on the serious and brutal nature of war and life in general. Previously the reader had been cushioned from experiencing the full horror of events, but in the final section, the events are laid bare. The horror begins with the attack on the undefended Italian mountain village, with the following chapters involving despair (Doc Daneeka and the Chaplain), disappearance in combat (Orr and Clevinger), disappearance caused by the army (Dunbar) or death of most of Yossarian's friends (Nately, McWatt, Mudd, Kid Sampson, Dobbs, Chief White Halfoat and Hungry Joe), culminating in the unspeakable horrors of Chapter 39, in particular the rape and murder of Michaela, who represents pure innocence. In Chapter 41 the full details of the gruesome death of Snowden are finally revealed. Despite this, the novel ends on an upbeat note with Yossarian learning of Orr's miraculous escape to Sweden and Yossarian's pledge to follow him there.