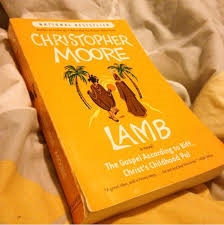 Lamb: The Gospel According to Biff, Christ's Childhood Pal

Lamb: The Gospel According to Biff, Christ's Childhood Pal is a novel by American writer Christopher Moore, published in 2002. In this work the author seeks to fill in the "lost" years of Jesus through the eyes of Jesus' childhood pal, "Levi bar Alphaeus who is called Biff".The original edition of Lamb was issued in hardback and paperback and contains an afterword by the author explaining some background of the novel. In 2007 a special gift edition was published, with a second afterword by Moore, recollecting his trip to Israel for research.According to the author, the producer-director Peter Douglas (with Vincent Pictures) optioned the film rights to the novel.Biff is resurrected in the 20th Century to complete missing parts of the Bible, under the inefficient supervision of Raziel; wherefore Biff narrates that he and Joshua (by Biff's account, the Hebrew original of the Hellenized "Jesus") travel Eastward to consult the Three Wise Men (a magician, a Buddhist, and a Hindu Yogi) who attended Joshua's birth, so that Joshua may learn how to become the Messiah. Over twenty years, Joshua surpasses the trio by incorporating his beliefs into theirs: he learns to multiply food from a Wise Man and learns to become invisible from another, whereas his ability to resurrect the dead, initiates his first meeting with Biff in childhood. Throughout his role, Biff is sarcastic, practical, and loyal, against Joshua's temperamental and sometimes idealistic character.The recounting of Jesus' human and godlike qualities, combined with Biff's earthy debauchery, humorously explains the origins of judo and cappuccino; reasons that Jews eat Chinese food on Christmas; and how rabbits became associated with Easter. The Three Wise Men, Mary Magdalene, Joseph, and Mary all appear as well: Mary Magdalene (here nicknamed 'Maggie') is depicted as harboring love for Joshua, while Joshua remains celibate, and Biff compensates by an active sexuality of his own.At the novel's conclusion, Biff gives "The Gospel According to Biff" to Raziel and discovers a resurrected Maggie exiting the room opposite his, having finished her own Gospel weeks before. At Raziel's behest, they are united immediately.