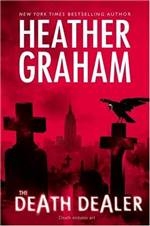 The Death Dealer (Harrison Investigation #6) Genevieve O'Brien knows all about nightmares. She survived for two months as the prisoner of a deranged killer. Now a new menace is stalking the streets of New York. The media is buzzing about the Poe Killings, a string of homicides mirroring the author's macabre stories. Almost without exception, the victims have been members of a literary society devoted to the master of crime fiction--and Genevieve s own mother may be next. Spooked by the bizarre slayings, Genevieve turns to PI Joe Connolly, her rescuer, her friend and...? She wants him to be much more, but he's been avoiding her since her ordeal, and she can't seem to get close to him. Joe isn't sure there even is a case. But as the body count rises and their investigation leads them miles from Manhattan, he has to admit that there's a twisted new serial killer at work. Even more unsettling is the guidance Joe is receiving from beyond the grave. People he knows to be dead--his cousin Matt and Matt's fianc&Atilde;&copy;e Leslie--are appearing to him, offering new clues and leads, and warning him of terrible danger ahead. But not even otherworldly intervention can keep Genevieve and Joe's new nightmare from becoming terrifyingly real--and putting them squarely in the crosshairs between this world and the next.